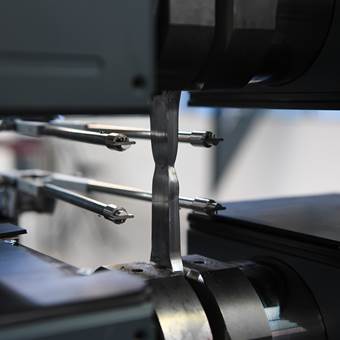 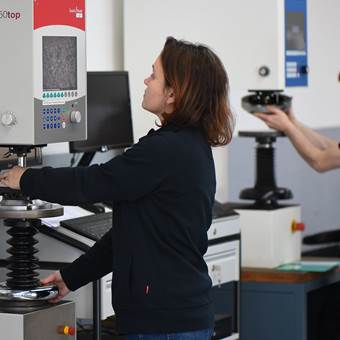 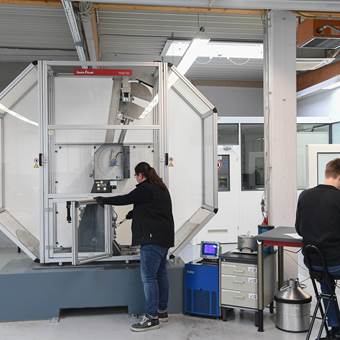 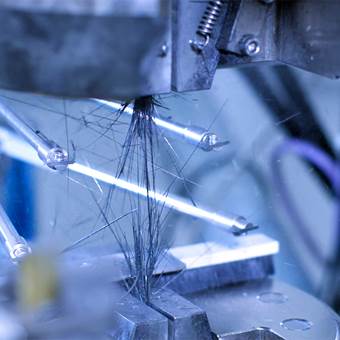 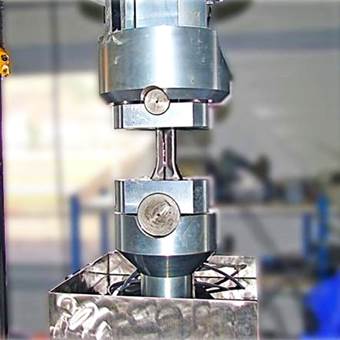 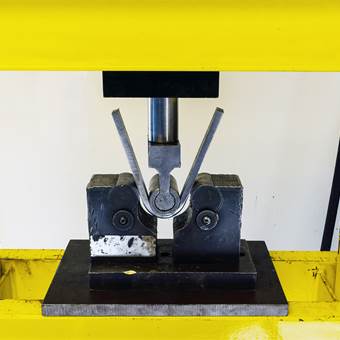 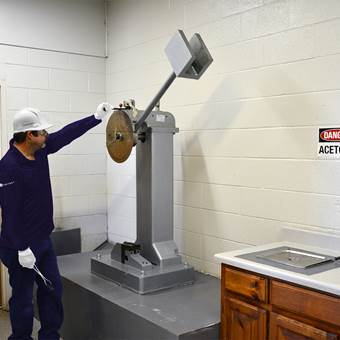 Destructive testing (DT) is an essential process in the materials selection and approval process for high-performing materials.

DT is often performed on low-cost, high-volume components. In opposition to non-destructive testing (NDT), in which inspections are performed without material damage to the asset’s structural integrity, destructive tests stretch, bend, fracture and otherwise strain the component until mechanical fracture in a controlled environment.

This is done to gauge, among other factors, their strength, hardness, stiffness, and the amount of damage they can sustain while in operation, all according to customer specifications. Destructive testing is designed to produce consistent, repeatable results, so if one component fails a certain way, it can be expected that others that were manufactured with a similar process will have similar flaws.

DT is necessary for composites, metals, and other materials that are used in airplanes, cars, storage tanks, and many other applications. These have often to perform under extreme stress and high temperatures.

MISTRAS’ destructive testing services simulate these environments to test newly-fabricated component specimen until mechanical failure, to ensure they will perform safely once in operation. MISTRAS’ DT services can be utilized for a variety of materials including:

Metals or composites subjected to increasing levels of tension, compression, shear, and peeling during their operating time. MISTRAS uses different techniques of mechanical testing in which e.g. adding of temperature, strain, unidirectional, or shear load can provide useful results about reaction of materials operating under extreme stress. You can learn more about MISTRAS’ mechanical tests in the following.

Hardness testing encompasses multiple techniques in which a forced indentation is applied to a material and the depth of the indentation is measured; the deeper the indent, the softer the material. This is useful to gauge the material's quality and resistance to impact.

MISTRAS uses different hardness testing methods to determine the hardness of materials via small indentations. In combination with other test methods like tensile testing, impact testing, metallographic and chemical analysis, you can detect materials or find out more about their heat treatment processes.

Impact testing involves fracturing a material at a high velocity to determine material toughness, impact strength, and ability to absorb energy. It is often used to provide information about the strengths and weaknesses of welds. MISTRAS performs impact tests at a variety of temperatures to replicate the environment of the material when it is used in service.

Impact testing like Charpy V-notch or U-notch tests determine impact toughness by recording the energy a material absorbs when it fractures. For welded materials, impact testing can be used to provide information about the strength and behavioral properties of the weld.

MISTRAS performs impact tests at a variety of temperatures to replicate the environment of the material when it is used under real conditions.

For composite materials, MISTRAS uses impact testing to simulate e.g. in-service damage, which leads to delamination within the material. After that, residual mechanical properties are determined.

In Shear Testing, parallel forces that are applied to the contact surface determine properties under shear stress. Shear testing is important for components like bolts or screws, which experience shear forces if the surfaces that they are fastening together move side-to-side.

It is also used to test specimens produced via additive manufacturing processes.

Tensile tests are often conducted to evaluate tensile strength, yield strength, and elongation. The method comprises pulling on the test specimen to determine how strong a material is, and how much it can elongate.

MISTRAS technicians apply controlled tension to metallic, composite, and polymer materials, with the objective of gauging its ultimate tensile strength, maximum elongation, yield strength, elasticity, ductility, and other material characteristics. Also called a ‘tension test’, the test can be performed under a variety of conditions, customized specifically to each experiment depending on the environment of the material being observed.

Tensile testing of the strength of the adhesive used to bond components together. This is used for quality control (QC) and determining adhesive behavior to predict how a certain substance will perform while in use. 90-degree and 180-degree peel tests pull bonded materials apart and record the average force needed for complete separation.

During general peel adhesion tests, the peel strength of the adhesive used to bond components together is determined. Performed by our trained personnel, peel adhesion testing is a rapid and reliable way to gain insight into material behavior.

Commonly used in for aerospace components, Drum Peel Testing determines the bonding resistance of adhesive materials with flexible and rigid surfaces. In this test, a tool known as a climbing drum peel measures resistance by applying peeling forces as materials are separated.

MISTRAS offers a special drum peel test that is widely used for aerospace components. The test determines the so-called drum peeling force by peeling a metal sheet off honeycomb core. Then, we use a climbing drum peel to determine resistance by applying only peeling forces on to components.

A peel test that separates flexible and rigid materials with a floating roller peel fixture to determine average peel forces. The test is performed at an angle for non-flexible substances.

During the floating roller test, MISTRAS lab technicians separate flexible and rigid materials from each other using a specified roller peel fixture. The determined average peel force lets operators know of true metal behavior and how the component will act in a commercial setting.

Testing of the amount of fatigue a rolling bearing can withstand to reveal the impacts of heat, finishing processes, and more. Due to the stress and strain a rolling bearing is subjected to while in use, it is important to know its mechanical capabilities.

Within composites, a bearing test that determines the performance of the laminate and the specimen is subjected either to a tensile or compressive load through a bolt until failure. The tested specimen is then investigated for the failure mode.

Standard or finished structure laminate materials have pressure applied in a shear test for breaks to occur. Laminates comprised of epoxy resin or another brittle material are tested. The type of break that occurs can characterize the material of the matrix or quality of the matrix bonding.

MISTRAS technicians use interlaminar shear strength testing or short beam strength (SBS) testing to determine the through thickness shear strength of a laminate. The specimen is subjected to a short-span, three-point loading, which help lead to conclusions about the matrix quality and manufacturing process can be drawn.

Our interlaminar shear strength (ILSS) testing solutions help to ensure that the strength between laminate plates is determined. ILSS is used for standard laminates and laminates made with finished structures.

Adhesive joint test where plates are bonded together with a specific adhesive and torn apart, measuring the breaking point where the plates become separated. Lap Shear Testing is used for determining the proper use of adhesives.

MISTRAS uses lap shear testing to determine the strength of adhesives. MISTRAS evaluates the maximum force and evaluates fracture surfaces. This is an efficient test to observe bond processes.

Interlaminar Fracture Toughness Testing characterizes delaminations in materials and determines the fracture toughness of reinforced composites. As the sample is pulled apart, the crack growth is measured until the sample reaches a breaking point.

MISTRAS technicians perform Interlaminar fracture toughness testing as a reliable and efficient DT method. Loading is performed either in tension (mode I), shear (mode II) or a combination of both.

A shear test method that is used particularly for large composite materials. Holes are drilled into the four edges of a panel and the panel edges are clamped between rails. During the test, the panel pulling forces is applied diagonally to opposing corners of the frame as the pairs of rails rotate relative to each other.

The picture frame test is a trusted and reliable testing method for large material samples in order to determine shear data needed for design and structural validation. MISTRAS prepares the materials for testing completely and drills holes based on the size and thickness of the material. It completes sandwich panel testing and helps to reveal the materials draping properties.

The flexural test is a qualitative destructive test that evaluates material's ductility and soundness. Bending a material can be analyzed to determine characteristics under pressure, resistance to cracking, and ability to withstand load. This test is often used for butt-welded joints.

Curved Beam Strength Testing measures the strength of curved beam properties of a composite. This test consists of two legs connected by a 90-degree bend that applies a constant bend across the fiber-reinforced beam. This test can also measure interlaminar tensile strength.

MISTRAS curved beam strength testing is a popular testing method and is highly regarded for its effectiveness.

The nick break test is composed of precutting the surface of a material and then applying direct force, often by hitting the surface with a hammer or pulling it in a tensile tester. The fractured material is then examined to analyze soundness based on slag inclusions, porosity, incomplete fracturing, cracks, and other characteristics of the fractures.

Nick break testing is composed of pre-cutting the surface of a welded material and then applying direct force. The fractured material is then examined to analyze technical reliability based on slag inclusions, porosity, incomplete fracturing, cracks, and other characteristics of the fractures. Nick break testing ensures any present internal defects are within defined limits of material specifications. This testing method reveals the internal quality of welds.

MISTRAS determines the amount of fatigue of rolling bearings. Due to the stress and strain a rolling bearing is subjected to while in use, it is important to know its mechanical capabilities.

Two types approaches exist in order to perform shear in the case of composite materials: using an angled laminate, or a V-notched specimen loaded in shear. In the former case, the in-plane shear properties are determined by loading an angled laminate in tension. In the latter case, the fixture is either loaded in tension (rail shear method) or in compression (called the "iosipescu shear method"). The through thickness properties of the laminate in shear can also be determined depending on the specimen extraction.

The test is often used for quality control and quality assurance (QA/QC) needs or in order to gather data for characterizing materials.

MISTRAS uses destructive testing to ensure the quality of spot welds and other equipment componentry. A force is applied externally to the spot weld to reveal the weld zone for further inspection and analysis. This type of testing allows technicians to get a more in-depth inspection of the spot weld.