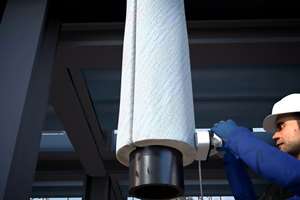 Small amounts of water can accelerate corrosion if faulty seals or inadequate construction allow it to penetrate the interface between metal and insulation or fireproofing materials in steel. Passive fire protection and insulation can hide signs of degradation, and if left undetected, corrosion can then cause the failure of steel support structures, piping systems, or vessels.

After performing a detailed visual inspection to look for signs of degradation, MISTRAS technicians will apply PEC technology to measure the wall thickness of the metal behind the fireproofing or insulation. PEC probes placed on the wall in question apply an electric charge to generate eddy currents in the steel, allowing probes to estimate wall loss based on measurements of the induced magnetic field.

PEC obtains a measure of the wall thickness by taking an average reading over the probe’s footprint (the roughly circular area where eddy currents flow). This makes it ideal for measuring general wall loss.

Using the PEC inspection technique offers a variety of benefits, including:

PEC can be used to detect CUI and corrosion under fireproofing (CUF) in a wide variety of assets, including:

In pulsed eddy current inspection, an electric current is introduced in a probe’s transmitter coil, which magnetizes the steel beneath the probe. The current is then switched off and, as a result, the steel demagnetizes. This generates eddy currents in the steel, which diffuse inwards from the steel surface and decay in strength as they propagate, which is detected by a set of receiver coils in the PEC probe.

ECA technology offers the ability to electronically drive multiple eddy current sensors placed side-by-side in the same probe assembly. When ECA data is multiplexed, the individual eddy current coils are excited at different times, allowing the system to excite all of the coils in the probe without ever exciting any two adjacent coils at the same time (avoiding mutual inductance between the individual sensors).

ECA enables larger coverage in a single probe pass while maintaining a high resolution, and improves flaw detection and sizing with C-scan imaging.

PEC Array is able to conduct inspections through: